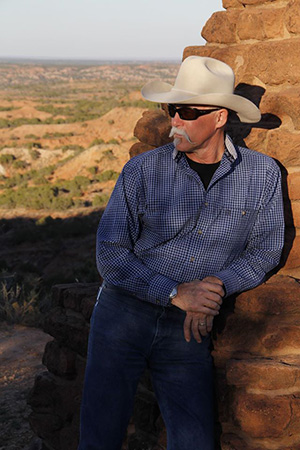 I was born in Paris, Texas, but my dad worked for the Ford Motor Company in Dallas. Because of his job, we lived in old East Dallas (known known as Pleasant Grove or simply the Grove), but every Friday evening my parents put my brother and me in the car and made the 120-mile drive to the small rural community of Chicota, Texas. That’s where I truly lived at my grandparents’ place in the country. Their little scratch farm in Lamar County was my true home and continues to hold my roots, no matter where I’ve lived for the past 63 years.

Living in Dallas afforded me a good education and it’s where I first discovered books in the Urban Park Elementary School library. The librarian, Miss Rosalie Russell, saw something in me that proved to be an infection I’ve endured since 1960. She called it the Love of Reading and since she introduced me to the Cowboy Sam series, I’ve never been without a book nearby. That malady progressed to a secondary infection called Book Collecting and finally progressed to the advance stage of The Need to Write.

I started my writing career in the fifth grade, and my work didn’t truly progress until nearly 25 years later. In the meantime, I graduated from W.W. Samuel High School, worked in a library as a “Page” (one who shelves books, and that job fed into my Book Needs). That was a great job and I was submerged in books, discovering influential authors such as Donald E. Westlake, Jack Kerouac, Jean Shepherd, William C. Anderson, and guys we know by their last names, Heinlein and Silverberg.

I spent two years at Eastfield Junior College in Mesquite, TX, and two years later earned a B.S. in Industry Management from East Texas State University (now Texas A&M Commerce).  Instead of going into the field of architecture like I’d planned, I realized I had no interest in leaning over a drafting board for the rest of my life. I wound up taking another year’s worth of courses and earned a Teaching Degree.

My bank account was down to 26 dollars when I finally landed a teaching position in the Garland Independent School District, a suburb of Dallas. There I taught hormone-driven middle schoolers for eight years, and high school for the next two, all the while trying to figure out that writing thing. We were paid once a month in the GISD and I received ten times as many rejection notices during that same period from a wide range of state and national magazines. Thinking I wanted to work my way up to a position as a building principal, I earned a M.Ed. from E.T.S.U. and a Superintendent’s Certificate before deciding that wasn’t where I wanted to spend the rest of my career.

My best friend, Steve Knagg, was named Director of Communications in the Garland ISD in 1986 and hired me out of the classroom to be the district’s Communications Specialist, a title I’m sure someone made up off the cuff to satisfy the payroll department. As the years passed, my title changed along with the duties required to keep a fast growing district on track. I read voraciously during that time and discovered author after author who influenced my attempts to write.

And Then It Clicked

I was reading three authors at the same time back in 1988 when something happened that I wasn’t expecting. Robert C. Ruark, Donald E. Westlake, and Pat McManus (I’ve always had at least three books going at the same time), gathered together in my head and finally made me understand what my writing was missing. The combination of writing styles distributed across several decades jelled to create something I hadn’t yet discovered… my Voice.

I started writing newspaper columns and they led to magazine articles. I finally finished my first novel at age 56. The Rock Hole, published by Poisoned Pen Press, came out the year I retired after 35 years in public education. Not long after, I met my great friend and mentor John Gilstrap about that same time at the Sleuthfest Conference in Florida. We clicked the moment we sat down together at an empty table in a closed hotel bar.

It was one of those times when you meet the right person at the right time. We spent the next three days together, most of it at the bar, and on the last evening he leaned over that same table. “Do you mind if I offer you some advice?”

“I don’t know what that means,” he said, “but if it’s yes, I need to tell you something. Pardon me for being direct, but you’re doing everything wrong, other than the way you write.”

Never one to turn my back on good advice, I ordered more drinks and spent the next several hours listening to his advice and while asking questions about publishing that I’d carried for years.

It was John who finally set my boots on the right road with sage advice, introductions, time, suggestions, and liberal applications of scotch and gin. Now we travel together across this great nation and explain to our wives why our bar bills exceed the room charges. His Jonathan Grave thriller series is superb.

To date, more than 2,000 newspaper and magazine articles bear my byline. The Rock Hole was a finalist in the prestigious Benjamin Franklin Award presented by the Independent Book Publishers Association, and a finalist for the Will Rogers Medallion. I’m a member of Mystery Writers of America, the Writers’ League of Texas, International Association of Crime Writers (North American Branch), Sisters in Crime, The Texas Outdoor Writers Association, and International Thriller Writers.

I’m an avid outdoorsman, love to travel, camp, canoe, backpack, hunt, and fish, to name only a few activities. I’m also that rare male human animal that has no use for competitive sports, professional or otherwise.

The love of my life, Shana, and I live in north Texas.