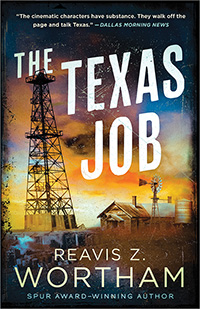 Some men are destined for danger.

Texas Ranger Tom Bell is simply tracking a fugitive killer in 1931 when he rides into Kilgore, a hastily erected shanty town crawling with rough and desperate men—oil drillers who’ve come by the thousands in search of work. The sheriff of the boomtown is overwhelmed and offers no help, nor are any of the roughnecks inclined to assist the young Ranger in his search for the wanted man.

In fact, it soon becomes apparent that the lawman’s presence has irritated the wrong people, and when two failed attempts are made on his life, Bell knows he’s getting closer to finding out who is responsible for cheating and murdering local landowners to access the rich oil fields flowing beneath their farms. When they ambush him for a third time, they make the fatal mistake of killing someone close to him and leaving the Ranger alive.

Armed with his trademark 1911 Colt .45 and the Browning automatic he liberated from a gangster’s corpse, Tom Bell cuts a swath of devastation through the heart of East Texas in search of the consortium behind the lethal land-grab scheme.

“Set in 1931, this well-crafted crime novel features Texas Ranger Tom Bell, a supporting character in The Right Side of Wrong, Wortham’s third Red River mystery. Authentic settings and richly drawn characters complement Wortham’s striking depiction of the Texas oil boom and the unavoidable corruption, greed, and anarchy that accompany it. Hopefully, Bell will be back in a sequel.”
—Publishers Weekly

“Reviewers taking on a Wortham novel will make heavy use of cowboy-movie images. (As the story unfolds) the unkillable Ranger goes from hero to superhero, ‘a man made of hard bone and corded wire.’ None of this will put off Wortham’s admirers, who can’t get enough of ‘the sweet natural cologne of leather.'”
—Booklist

“Readers who’ve already seen Tom grown old in earlier installments of Wortham’s Texas Red River series will be rubbing their hands in eager anticipation of what happens next. A… powerful tale of a solitary hero confronting a web of conspirators against hopeless odds.”
—Kirkus Reviews

“The action starts out strong, moves at a fast pace, and the suspense continues to build throughout. An engaging and action-filled crime thriller in a historical setting that kept me turning the pages.”
—Mystery Scene Magazine