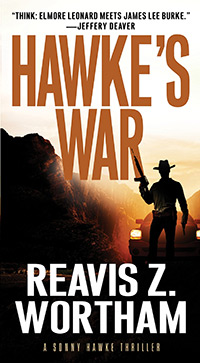 The serene beauty of West Texas’s Big Bend National Park is shattered when four hikers are brutally ambushed by a sniper. Only one survives to report the murders. When investigators come up with nothing, they’re left wondering if this is a single incident—or the beginning of a rampage. One week later, Texas Ranger Sonny Hawke drives his 3500 Dodge Dually into the park, determined to unearth the truth…

Before he knows it, he’s in the same sniper’s crosshairs. The drug and human smuggling cartel known as the Coyotes Rabiosos—Rabid Coyotes—have lured him to remote backcountry, looking for payback for an old grudge. Wounded and stranded in the harsh desert terrain, hunted, and outnumbered, Sonny is about to become the target of an even more dangerous enemy—one whose thirst for revenge could incite an international conflict far beyond the U.S.-Mexican border…

“Although Wortham’s Texas Ranger Sonny Hawke deals with modern-day security threats and international tensions, his adventures have the feel of the Old West about them, from the protagonists’ eschewing of technology to the remote and remorseless desert setting. The result is a book that will appeal to both fans of police procedurals and those with a fondness for the self-reliant lawmen of old. Hawke’s narrative voice is intriguing and insightful… Fans of the series will feel right at home here, and new readers should have little difficulty following this fast-paced story.”
—RT Book Reviews

“This elegant thriller that reads like a modern-day Western conjures memories of gunfighters of lore, a tradition Hawke proudly holds up while riding the ranges of Texas’s Big Bend National Park… Wortham hits the bull’s-eye dead center in this tale worthy of Louis L’Amour and James Lee Burke. Once of the best thrillers I’ve read this year, featuring emotional landscapes as sprawling as the physical ones.”
—The Providence Sunday Journal

“Wortham writes well in describing the forbidding landscape and the difficulties of those trying to survive in it, not easy even when people aren’t trying to kill you.  Readers who like action-packed thrillers that leave a lot of bodies should find Hawke’s War to their liking.”
—PCA Mystery & Detective Fiction Reading List